“Bullshit! This is fucking bullshit!” he yelled, slurping from a Coke can and stomping up and down the line. “Front row. Front row. But no.” He rhymed aggressively. No response – unable to find anyone to engage with his mad ranting, the bonkers chap joined the queue directly behind us and continued his loud conversation with himself.

We had all just been kicked out of the Prince Charles Cinema bar and told to go line up outside in Leicester Square. We felt like naughty school children. This made Coke can man, who had been queuing up in completely the wrong place, pretty angry. Normally, one would want to keep such oddball behaviour at arm’s length, but as we were here for a book reading, we felt reasonably safe.

The rest of the audience consisted of bearded hipsters, fashionable glasses, scruffy students, and a large number of people wearing tops emblazoned with the names of their favourite bands. This was the London stop on Greg Sestaro’s Disaster Artist book tour; which dealt with his experiences working on The Room, the ridiculously bad 2003 film that has since been embraced by millions of fans around the world. We were now standing amongst the devoted… and they are a very strange lot indeed.

The Room, for those who haven’t seen it, was meant to be a heartfelt tale of the American dream gone wrong: an Othello-esque tragedy of romance and betrayal to rival Tennessee Williams. What writer / producer / director Tommy Wiseau (pronounced Wizz-ohh) actually committed to film was an hour and forty minutes of perfect nonsense; with plots that don’t make sense, actors who can’t act, dialogue that is unintentionally hilarious… and a dramatic suicide finale that involves a love scene between a man and a red dress. It also cost around $8,000,000 of his own money to make.

A typical scene from The Room

The film itself is based on Wiseau’s own American dream ideals: hard work, money, success and acceptance. Raised in the Soviet Bloc, before fleeing to the States by way of France, Tommy spent his youth imagining two things: Being a success in America… and becoming a performer. Arriving in the US with nothing, he impressively managed to build up a clothing empire and property portfolio from scratch – starting out, apparently, by selling yo-yos on the San Francisco prom.

Unfortunately, his version of ‘typical’ was in fact, quite insane. All The Room’s characters spoke lines that retained the broken-English rhythm and diction of the man who’d written them. Not only that, but each character was conceived entirely from his point of view. He could almost have done this as a one man show. Throw in the terrible sets, the fact it was shot in a parking lot, the unnecessary green screens, gibberish plot and the four different crews that worked on it… and you’ve got a fantastic disaster. It achieved a completely different kind of artistic success than originally intended.

And this success was in no small part to the gorilla marketing effort thrown out by Tommy. He littered the entire town with flyers, bill stickers and promo cards. You could literally walk into any restaurant bathroom in Los Angeles and see an advert for The Room. He hired out an LA theatre and played the film every day for two years, a move that returned him a mere $100 – $200 gross profit a month. But his most extravagant effort was a Highland billboard advert – one of the most prime pieces of ad space in the city – which set him back $5000 per month for five years. This and all other marketing material displayed his home phone number. In fact, the phone number still works… ring it and there’s a very real chance you could get through to the man himself. 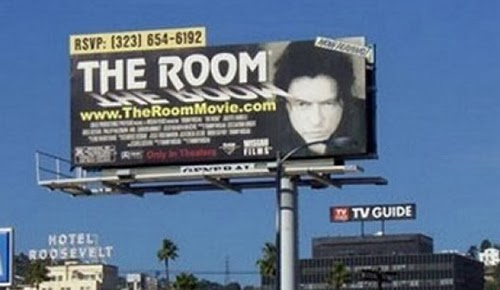 On the back of this campaign… and a slew of the worst reviews ever written, the film found an audience. Years before social media was the norm, students latched onto Tommy’s art and helped his campaign evolve organically. Barely a year after the film’s release it had achieved cult status. There was a Rocky Horror Picture Show level of participation. People dressed up as their favourite characters, armed themselves with props and attended screenings en masse. Celebrity fans such as Michael Cera and Alec Baldwin came out of the woodwork to hail its genius… and comedians such as Patton Oswalt and David Cross were instrumental in giving the film as much publicity as they could.

Amazingly, this ramshackle mess of a movie goes way beyond the realm of ‘it’s so bad it’s good’, and into territory that has never previously been achieved in cinema. Every scene, every piece of dialogue, every gaping plot hole somehow manages to be more outrageous – and more egregiously awful – than that which preceded it. It rains awful down upon you for 100 minutes, all the while carefully building up to a crescendo of absolutely appalling. The fact that Tommy Wiseau was being entirely serious just makes the whole thing so much more amusing. And that’s what the fans love most.

The crew we encountered at Sestero’s book reading certainly had the air of zealot about them. As we sat there in darkness waiting for the event to begin, the film quotes bounced around the room with Americanised whoops of delight. Groups were discussing intricate plot points, and rehearsing the questions they were going to ask in the Q&A. There was also a ridiculous amount of post-ironic backslapping.

When Greg took to the stage and kicked everything off with a short film, his motive for this tour quickly became clear. Cash. Lots and lots of lovely cash. There is of course nothing wrong with this. After all, the actor has spent the last few years being paid to tour The Room with Wiseau, promoting, doing Q&As and generally cheerleading for him. This is Sestero stepping out of the shadows with his own product.

Greg’s short film was a precise and professional marketing exercise featuring most of The Room’s co-stars talking animatedly about how awesome his book is… along with clips, sound bites and footage from previous promotional tours. After the excited rumpus had died down, the actor launched into one of his chapters. The book itself (co-authored with award winning writer, Tom Bissell), is as much a look at Sestero’s relationship with Tommy, as it is his work on The Room as both line producer and co-star. It also attempts to distance himself from a number of his artistic choices, claiming extensively, that he didn’t even ‘try’ during filming, and that he genuinely has it in him to be good.

The subsequent script reading was bizarre (how often do audience members volunteer to read in droves?) and the lengthy Q&A provided some well-practiced answers. Angry Coke can man asked two questions – neither were insane – which disappointed us greatly. Interestingly though, for all Greg’s talk of being an actor and an artist… he is now living his own, disturbing, version of the American dream. The Room is his business. His IMDb profile contains glorified extra work, and his life since The Room has involved him making a living from it. He travels the world, putting on these events, talking about The Room and selling his book. He’s also just sold the film rights to James Franco’s production company. This is Greg’s success. This is his final acceptance as an artist.

Before him, nobody else bar Tommy Wiseau had received any artistic kudos for their involvement with The Room, and nobody else had made any real money. All the actors have been roundly laughed at by millions of people. As serious professionals they are uniformly untouchable. Obviously, this does have something to do with their cumulative acting ability… but these unlikely stars have barely been able to find B movie work (although The Room’s female lead has just appeared in Ghost Shark 2: Urban Jaws).

The cast have achieved the kind of artistic success that no actor sets out to attain: the worldwide fame of sweet, stinking failure. They are the terrible cast of a terrible film, and as artists, this is all they have ever been known for. However, this isn’t stopping them trying to get their share of the cash. All of them, bar Tommy and Greg, have just launched a Kickstarter campaign to film a mockumentary based on their post Room lives: An appeal to all ‘Roomies’ to give them something new in The Room universe. Shameless? Yes. Potentially lucrative? Quite possibly. Greg Sestero is certainly managing to make a new living from the fans… and their Kickstarter project has already hit its cash target.

It’s definitely the sort of thing the fans at the book reading would pay to see. In fact, some of them have probably paid their money down already. Sitting there in the independent Leicester Square cinema, waiting for the Q&A to wrap up, we got the impression that the questions could have gone on all night if we hadn’t been kicked out (they had a Wes Anderson marathon scheduled). When the lights eventually came up, a trestle table was plonked down and three quarters of the audience steamed forward for chats, autographs and hardback books. We slipped off for beer and post-mortem chats.

The fans, it appear, still want a big piece of The Room, especially Tommy, who was the subject of most of the evening’s questions. As well as hawking his masterpiece, Wiseau is currently screening a new sitcom, The Neighbours, which looks awful, but certainly won’t be as entertaining as his debut. It’s not possible. You just can’t recreate something so unbelievably bad: a perfect storm of wrongness.

When The Room came out, the entire cast and crew did as much as they could to distance themselves from Wiseau’s artistic vision. Since the film became a juggernaut, they have all seemingly re-evaluated their positions. Interestingly, at the same time, Tommy had to do exactly the same thing. Either shut down the screenings, all the marketing, then mourn his failed creation that nobody understood and everybody laughed at… or change his position entirely and choke down this new kind of success, adulation and artistic acceptance.

In an instant, he tossed out his artistic integrity, began describing the film as a well-conceived black comedy satire and flip-flopped for the cash he didn’t need. Well, who can blame him. We’d most likely have done exactly the same thing… except we really do need the cash.