If Only I Were That Warrior is an award winning film that investigates the Italian occupation of Ethiopia in 1935 and the legacy it has left behind. Driving this story is the recently constructed Italian monument to Rodolfo Graziani, a fascist General responsible for numerous war crimes during the occupation. The film offers a stark insight into the fascist invasion of Ethiopia, Italy’s relationship with its colonial past and the new public discourse taking place today.

The director behind the film, Valerio Ciriaci chronicles the stories of everyone involved in this new controversy. Through it, he takes you on a journey into a wide-range of communities, delivering contemporary insight, and a historical counter to decades of revisionism.

The film can now be streamed here:

Q&A With If Only I Were That Warrior Director, Valerio Ciriaci

Can you tell us a bit about your motivation behind making the film? 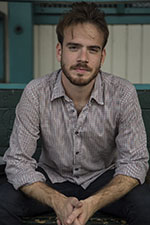 The idea for “If Only I Were That Warrior” took shape in February 2013 after I attended a panel discussion in New York focusing on the recently inaugurated monument to Rodolfo Graziani. I was struck by the visceral reaction of anger and indignation that the monument brought out in the Ethiopians who were present that day — and I realized how little I knew, as an Italian, about our colonial ventures in Africa. I began reading about the Italian invasion of Ethiopia, and I learned about the war crimes my countrymen had committed in the name of Mussolini’s imperial ambitions.  As I continued my research, the question I kept returning to was: how can Graziani, who is remembered in Ethiopia as the most despicable of criminals, be honored in Italy with a public monument? And furthermore, how was this monument approved in a country where Fascism is constitutionally banned? The central motivation behind “If Only I Were That Warrior” is to unravel these questions and to explode revisionist myths such as ‘italiani brava gente’ (Italians are good people), which portrays Italians as kind and tolerant compared to other colonial powers.

What do you think of how the film has been received in Italy and around the world? And has there been a negative as well as a positive reaction?

The response has been extraordinary. When we set out to make this film, we didn’t know what kind of reactions to expect, seeing as the issues we focused on are quite delicate. But soon after the release we started to see a lot of interest, in Italy as well as other countries — we continue to receive screening requests from individuals and organizations worldwide, and so far the film has had more than 60 independently organized screenings. Ethiopian and Italian audiences react more strongly to the documentary because the topic, for obvious reasons, is more personal there. In Italy, people are often quite surprised to learn about these war crimes, that have been deliberately concealed over the years. The issue is still controversial and we sometimes also receive negative and antagonistic feedback. I think that is inevitable and a sign that we are touching a raw nerve. Some have criticized the film for showing the Italian occupation in such negative light, while others have told me that too much space is given to apologists of Graziani’s deeds and of the Italian occupation in general. Ultimately, I hope the film’s impact will be to encourage a serious conversation about a chapter in history that has been overlooked for too long.

How has the film been received by the Ethiopian community?

We received a lot of support from the Ethiopian community, especially from members of the Ethiopian diaspora. They helped us from the very beginning, when we were crowd-funding in order to fund our filming trips — and they continue to engage with the project by organizing screenings of the film in their communities and by spreading the word within their networks. With the passing of time, there is as strong a need to keep the memory of this conflict alive within the Ethiopian community. It’s important to pass it down to the young generations. Hopefully the film can be a tool to try reconciling the different memories of that historical period, that are very fragmented in Ethiopia as well.

Can you tell us a bit about your latest award?

In June, “If Only I Were That Warrior” was awarded the Italian Golden Globe for best documentary. It’s a prestigious prize given out every year by the Foreign Press Association to recognize the best Italian films. It was great honour, and considering the film’s independent origins, it also came as a surprise. We were in competition many high budget productions, so producer Isaak Liptzin and I were extremely pleased to see the film recognized alongside names such as Roberto Benigni (Golden Globe for career achievements) and Gianfranco Rosi (Grand Prize for “Fire at Sea”).

How big a problem do you think fascism and the attitudes towards fascism are in Italy today? And can you see a time when these attitudes will change?

It’s still an urgent issue in Italy, not only because we are witnessing a resurgence of openly neofascist groups, but also because the fascist regime’s historical legacy has been gradually rebranded even among people who can’t be classified as right-wing extremists. I think it’s extremely important to reverse these trends. With regard to Italy’s internal affairs, the whitewashing of colonial crimes is part of a bigger problem concerning how we deal with our fascist past. The transition to a democratic republic that took place after World War II was ideologically ambiguous in the fact that many fascists were allowed to return to politics shortly after Mussolini’s disappearance, and soon thereafter to form the MSI party, directly inspired by fascist values. That’s why we weren’t surprised to find out that the monument to Graziani was not an isolated event — similar displays of nostalgia continue to pop up across the country to this day. The best way to combat such episodes is by staying alert and, most importantly, through education. Fascist crimes ought to be covered in much greater detail in our school curricula.

How important is it that the colonial brutality of Italy’s past is remembered and recognized by future generations?

It’s highly important because it can help us understand our current problems. In a time of economic uncertainty and mass immigration, the populist xenophobic message of right-wing movements is attracting a lot of interest. Present and future generations should therefore look at what happened in the past when similar situations existed. By studying and understanding how those dark times unfolded, we can obtain more effective tools to stop a resurgence of those populist ideals. In the ongoing debate about immigration, for example, it’s striking to see so many people react with fear and sometimes even open racism. We don’t seem to understand that mass migrations from countries like Eritrea, Ethiopia and Somalia are at least partially driven by our own colonial policies in the region and their prolonged geopolitical repercussions.

Why do you think there is still a great deal of positive nostalgia surrounding some of the darkest elements of 20th century Italy? And how big a problem is there with historical revisionism?

This nostalgia is possible because we never confronted those dark elements in the way we ought have. It’s a yearning for a mythical past that never truly existed, as the Fascist regime’s cruelest deeds have, when possible, been swept under the carpet. In the colonial context, the lack of post-war trials (what historian Angelo Del Boca called an ‘African Nuremberg’) allowed fascists like Graziani to go unpunished and even find a place within the institutions of the new and democratic Italian Republic. It’s an amnesia for which we are collectively guilty — a vacuum easily filled by revisionists.

Do you think certain types of art, architecture and philosophy play a big part in keeping this nostalgia alive?

I don’t think rationalist architecture or futurist art from the fascist period can be blamed for the insidious resilience of extreme right-wing ideology. If anything, certain works of arts should be preserved and displayed as documents of our past and warning signs for the present. Of course we need to be wary of the symbolic power of certain monuments, and we should take care to provide visitors with all the necessary tool to dismantle the propaganda they were meant to embody. I think a monument like the one in Affile, constructed in 2012 with little or no artistic intent, is a different matter altogether, and it merits whole-hearted condemnation.

What do you think about the rising popularity of right wing ideals around Europe and the rest of the world? And how has this shift been received in Italy?

It’s a trend that shouldn’t be ignored. As I mentioned above, we in the Global North are experiencing a period of crisis and transformation, which has sparked a resurgence of nationalist, racist ideals. This year we saw proof of this most remarkably in the UK’s ‘Brexit’ and in US, where I live, with the rise of Donald Trump. In Italy, neofascist organizations are steadily growing, and the government doesn’t seem willing or able to wield the legal devices that could prevent it. I think we should consider updating those laws that are meant to limit the resurgence of fascist ideology and the perpetration of hate crimes.