“Is that Owen Jones?” whispers Tom Robinson with some excitement.

We peek round the corner and can’t quite make up our minds.

We’re at the BBC Café Nero to interview the 2-4-6-8 Motorway singer and 6Music DJ about… well, to be fair, we had quite a big list. David Bowie wasn’t on it, but as he’d passed away at the start of the week, he came up quite a lot.

The trouble is Robinson has done too much bloody stuff. Where do you start? BBC Introducing and new music, LGBT rights, mental health, the Tom Robinson Band, his latest album and tour, Rock Against Racism, Pledge Music, Activism, the upcoming 6Music Festival? We went with his tour, albeit very briefly.

“[It’s] the first proper band tour of the century, actually. It’s just as well I got out and did it while I still can. Look at poor old David Bowie…

“But to give him his due, there was that moment in ’75, ’76 when we thought he was going to be well dodgy with his whole, ‘What this country needs is a fascist dictatorship.’”

In a week when all we’ve heard is glowing tributes, puff pieces and well raconteured tales of 70s debauchery, it’s refreshing to hear this sort of reflection… particularly as a lead in.

“He did have the good grace to climb down and apologise totally, and retract from it and get involved in anti-racist causes in the ‘80s. Tin Machine was very explicitly anti-racist, so, we only wish a few other stars of that generation…”

Our “Mr Clapton?” is met with emphatic nods.

In fact, it was the Cream singer’s onstage endorsement of Enoch Powell and his ‘Rivers of Blood’ speech back in 1976 that spawned the Rock Against Racism Movement that Tom Robinson (who’s today sporting a ‘Nazis are no Fun’ RAR badge) helped drive forward.

“One of the most refreshing things about Rock Against Racism in its early days, was the grassroots nature of it. It was unknown white bands [and] unknown black bands performing on the same stage at small venues which were put on on a DIY basis by supporters around the country.”

The newly formed Anti-Nazi League (today known as Unite Against Fascism) helped drive RAR into the national consciousness by involving mainstream artists such as The Clash, Stiff Little Fingers, Elvis Costello and The Specials.

“The Specials are a good case in point, because in a way RAR handed over to the two-tone movement who not only supported Rock Against Racism, but actually were Rock Against Racism embodied… multiracial bands were very much more to the point than having a white band followed by a black band.”

It’s clear that grassroots movements are a big thing for Robinson, none more so than the work he does championing new bands and artists with his BBC Introducing show.

“The great thing about BBC Introducing is that it actually allows the bands to contact us direct, without having to go through a plugger and submit the music to get heard. I can’t really overemphasise how important that is, because traditionally, all the time I’ve worked in music it’s always had to be mediated by a third party.

“If the DJ can actually talk direct to the artist and go ‘yes’ or ‘no,’ that’s cutting out an awful lot of bullshit and money. Money that has to change hands in order to do that mediation. It shouldn’t cost money. It really fucking shouldn’t cost money to get your record on the radio.”

Back when Tom Robinson was a mainstay in the charts, not only did you need the pluggers, but you also needed a ‘strike force,’ which was essentially, “a group of people with estate cars and cartons of records in the back who knew the address of every single shop that had the chart return machine in it.”

Following the huge success of the Tom Robinson Band in the 70s, a steady solo career in the 80s – that yielded songs such as War Baby and Atmospherics: Listen to the Radio – the 90s saw him attracting attention for, quite frankly, ridiculous reasons.

Having long been a proud gay man, a vocal activist for equality and the singer of the anthem Glad to be Gay, the tabloid press were delighted to discover that Robinson had fallen in love with a woman and started a ‘conventional’ family.

In order to spike the story, he wrote his own press release and sent it to every newspaper except The People. “I ended up on Page 3 of the Sun next to the topless model, cuddling my baby. And of course the [LGBT] community is going ‘Why is he talking to the fucking Sun?’ The headlines were stuff like: ‘Glad to be dad.’ All kind of implying a retraction or change of position, ‘so glad not to be gay anymore,’ which was not part of the agenda.”

Identifying as a gay man who happened to be in love with a woman was not an easy point to get across at first. After receiving 15 years of adulation at Pride, Robinson was booed offstage and given the cold shoulder by many members of the community, before being invited back to Pride in the late 90s.

“They invited me to come and perform at the bisexual tent, and it was like a homecoming… I just walked out there on the stage and it was packed. Someone shouted out, ‘Where have you been Tom?’ and I said ‘making babies’ and they all cheered. So, it was good. It kind of made sense of the whole thing.”

The media, of course, have continued their obsession with sexual and gender labels. Only now it seems to have gone full circle. “Just be whoever you want to be…” reiterates Robinson.

It seems fitting that a chap so committed to diversity has ended up as a DJ on BBC 6Music: a station where a commitment to grassroots and live music is what sets them apart. Next up on their agenda is their 6Music Festival in Bristol starting on the 12th of February. Robinson will be there, running workshops with musicians, introducing bands and putting out a live show (along with many of the other DJs) from the festival.

That’s not to say Robinson has been ignoring his own new music of late, as 2015 saw him put out Only the Now, a folk-punk collection of social commentary and catchy tunes. Produced by Gerry Driver, Robinson’s first new album in nearly 20 years features collaborations with – amongst others – Billy Bragg, Nadine Shah, Lisa Knapp, Martin Carthy, Swami Baracus and John Grant… as well as the actors, Colin Firth and Sir Ian McKellen.

By crowdfunding the record on Pledge Music, fans were given an opportunity to get involved with making it. “One of the most popular pledges we offered was the chance to come down to the studio and hear the rough mixes… and meet the people making the album, have a glass of wine with us, and maybe sing on a track.

“It obviously meant that the album cost them £80 instead of £8, but they reckoned that was good value for money, so nobody is getting ripped off. You’re giving them a unique way of getting deeper involved. God knows, if David Bowie had offered the chance to come down to the studio and hear him making Blackstar, people would have paid thousands.”

It’s been a weird week and Robinson has just been working out the details for a Bowie tribute show he’s putting together for 6Music. “We’ve got Brian Eno talking about the making of the [Berlin] Trilogy… Eno was saying that during the making of Heroes – you know this terribly serious art-rock project – Bowie insisted on talking in Derrick and Clive voices for the whole time.

“The entire record was made at Hansa (Hansa Ton – the studio in Berlin), by the wall, with the East German guards looking at them through binoculars through the window of the control room, and Bowie going (affects Derrick and Clive voices):  ‘You know Brian, I think we could do with a little bit more compression on the guitar part here.’ ‘Well David I’m not sure about compression, I’d have thought if we put that through an equalizer.’ ‘No… equalizers aren’t really that good are they?’”

Now, I don’t imagine you’ve ever seen Tom Robinson do an impression of David Bowie and Brian Eno doing an impression of Derrick and Clive. As surreal experiences go, it’s up there; you know the interview can’t possibly get any better, so there’s only one thing left to do…

Have a final nose around the corner, then pop back onto Twitter to check if we really had been playing peek-a-boo with the Guardian’s Owen Jones earlier. 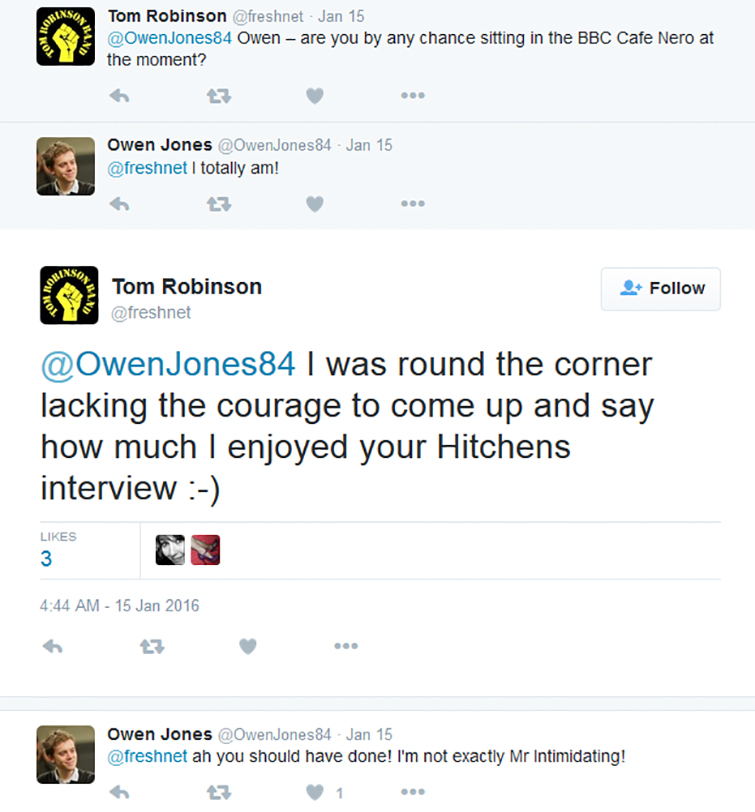